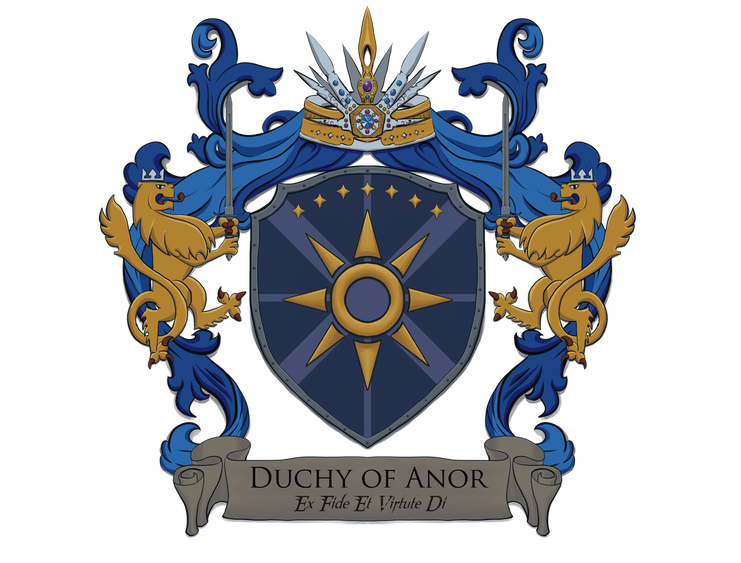 The Rulers of Anor are Duke Alduin and Duchess Adley.

​The Duchy resides upon the European Server of Selene and within the Kingdom of Al-Khezam.

If you are a fan of such films/shows/games as Lord of the Rings, Game of Thrones, a Knights Tale or Elder Scrolls due to their richness and depth then this is the Duchy for you.

The Sun never sets on Anor!

The Duchy is a multi-cultural society, where all are welcome to live freely under the protection of the realm. The Duchy is primarily a protected roleplay Duchy although roleplay is not a necessity.

​PvP is only accepted in self defense, law enforcement or time of conflict.
Anyone regardless of position within Anor who goes against this rule will face the justice system and the FULL force of the Anorian Guard.

The Duchy of Anor believes entirely in unity. Unity is what will make us strong and enable us to not only stand the tests of time but be prepared for any eventuality and threat. This is why recruitment takes place entirely on the Duchy level. We are a Nation State and together we develop our land and protect our borders as one people. The Anorian people.

WHO ARE WE SEEKING?

We are still actively recruiting, whether you are pledged nobility, aristocracy, settler, trader or adventurer you are welcome to join our Duchy. Be sure to click the link at the top of the page to join our Discord chat channel as this is our main form of communication.

The Duchy of Anor is seeking mature players who would be interested in creating an immersive environment of game play.